While my own experience on Mastodon has been a positive one so far, my experience is by no means universal.  As more prominent accounts from Twitter have joined, particularly those of black folks (and especially black women) I’ve followed there for awhile, they’ve begun to share details of consistently negative experiences on Mastodon.

Trying to talk about Mastodon about the problem of addressing racism on Mastodon is recalling memories of all my terrible experiences with facebook groups, and I think the reason is that people on Mastodon have the confidence of people who are saying stupid stuff in private

Her experience has been difficult enough that the Mastodon post sharing that she was taking a break from that platform linked to the tweet above.  It’s hard to imagine a more damning indictment of how a platform treats people from marginalized communities than posting that criticism on Twitter, a site that has done far less policing of slurs against black people in the wake of Elon Musk’s purchase.  Trying to summarize her thread wouldn’t do it justice, but if there is any common thread between her negative experience and that of other black people on Mastodon it is around the content warning feature (abbreviated CW as shown below). 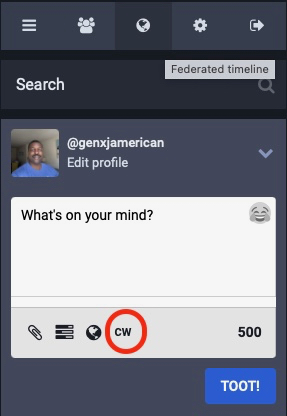 Dr. Prescod-Weinstein’s objection to the name of the feature is a function of being a rape survivor.  The other pushback I’ve seen most often is around the use of the feature for posts regarding racism.  Elon James White, who I first started following during his coverage of Ferguson in the wake of the protests of Michael Brown’s shooting death by police officer Darren Wilson, refuses to use it for discussions of racism.  Mekka Okereke, director of engineering for the Google Play online store, has a more nuanced viewpoint, which separates whether or not white people want to hear about racism from what is effectively a mislabeling of the feature.  He summarized his feelings on this as follows:

When I did a bit of searching to try and learn more about content warnings and trigger warnings in their original context, it seems that the original scope of such terminology was limited to things that could cause someone to recall a traumatic experience they had.  My primary takeaways from one piece in particular was that broader, more casual use of the term “triggered” ended up both being conflated with people being “too sensitive” and conflating trauma with mere discomfort.  “Conflating trauma with mere discomfort” ends up being a great summation of the way far too many white people still respond to black people merely describing the racism they’ve survived.

Mastodon (and the Fediverse)’s turn in the spotlight, and the negative experiences of at least a few black people on it I follow make it a microcosm of both the best and the worst aspects of tech more broadly.  A few of the best aspects: software a young man named Eugen Rochko first started writing in 2016, has held up rather well all things considered against a significant increase in usage and attention.  It’s open source, so not only can you see how it works, you can suggest changes, or even make a copy of it and make changes yourself if you have the time and expertise.  It uses a decentralized social networking protocol that doesn’t just interoperate with other Mastodon servers, but with other social networking applications that use the same protocol.  Despite the good–which is significant–Mastodon is just as susceptible to some of the negative aspects of the for-profit tech industry it intends to be an alternative to.  The most obvious negative aspect is the gatekeeping.  Despite beginning my professional career just a few years after the founder of Mastodon was born, it would take over 15 years of that career before I would find an employer where there was more than one other person who looked like me writing software for a living.  Software engineers who are Hispanic or Latino aren’t that much less rare than black software engineers.  Today, the percentage of women in technical roles is projected to be around 25% by the end of this year.  But the history of computing predates the machines that do it today, and a much higher percentage of those literal human computers were women.  Those women who do persevere through the gatekeeping that would prevent them from entering the industry ultimately end up leaving at unfortunately high rates because of the hostility to women that still persists in too many work environments.

Tim Bray (co-author of the XML spec and contributor to numerous web standards), shared this piece as one of his first posts on Mastodon.  I have no doubt that he meant well, and that the author of the piece meant well, but when you title a piece “Home invasion” when talking about new users of a platform you’re used to, that comes across as incredibly hostile.  The same author that talks about trans and queer feminists building the tools, protocols, and culture of the fediverse makes not a single mention of people of color in his piece–not unlike the commercial tech companies in general, and Twitter in particular that are among the targets of his critique.  The entire piece is worth reading in full to understand the author’s perspective, but I will pull quote and highlight one paragraph that seems most emblematic of the blind spot that some veteran Mastodon users appear to have:

This attitude has moved with the new influx. Loudly proclaiming that content warnings are censorship, that functionality that has been deliberately unimplemented due to community safety concerns are “missing” or “broken”, and that volunteer-run servers maintaining control over who they allow and under what conditions are “exclusionary”. No consideration is given to why the norms and affordances of Mastodon and the broader fediverse exist, and whether the actor they are designed to protect against might be you. The Twitter people believe in the same fantasy of a “public square” as the person they are allegedly fleeing. Like fourteenth century Europeans, they bring the contagion with them as they flee.

To see yourself (as a new user of Mastodon and a long-time user of Twitter) be described as someone bringing contagion hits a lot differently when you’ve endured racism in real life as well as online, and when you’ve had to overcome–and are still overcoming–so many barriers in both places merely to be included, much less respected.  And were the author to be called on this huge blindspot publicly, I have no doubt that he would respond with the same sort of defensiveness that Dr. Prescod-Weinstein described, and that Timnit Gebru, another recent joiner of Mastodon has also described.

As I said at the start of this piece, my own experience with Mastodon has been a positive one so far.  Some of it is a function of having participated in online communities for decades (as far back as the Usenet newsgroups days), and even becoming a private beta tester one of the newer ones (StackOverflow.com) before it went public.  But those communities too had their gatekeepers, mansplainers, and jerks.  Certain open source projects are unfortunately no different in that regard either.  There’s something to be said for understanding the pre-existing culture of a place–even if it is virtual.  That said, the idea that culture is static–and should remain so–is a perspective that it seems some Mastodon veterans would do well to change.  Otherwise, they risk perpetuating the same harms as commercial social media–just without the financial rewards.

While checking out the Mastonaut desktop client for Mastodon, I came across the following diagram explaining the visibility of a toot:

Still reading? I appreciate your patience. I don’t blame any of the folks who noped out of this post after seeing that diagram. It’s a consequence of the servers thing I mentioned in my previous post on exploring Mastodon. It’s one of many features that highlight who the target audience for Mastodon really is (people like me who used to write software for a living, or still do).

As I mentioned at the end of my first post on Mastodon, I’ve been following Martin Fowler’s notes on his own journey.  His November 1 memo on verification interested me, especially in light of Twitter’s recent update to charge $8 for the blue check mark.

As Fowler explained it, Mastodon being decentralized (unlike Twitter) means verification is up to each server.  Whoever runs it can verify members however they wish–or not at all.  The approach to verification he describes and implements is what he calls cross-association.  By adding a <link> element to the <head> of his personal website with an href attribute for his corporate Mastodon profile, Mastodon “sees” the link and marks it as verified.

I followed Fowler’s example to do the same thing with my Mastodon profile.  I updated the header.php of the WordPress theme I’m using this way:

With that change made, my Mastodon profile now looks like this:

In the wake of Elon Musk closing a deal to buy Twitter (after trying and failing to back out due to buyer’s remorse), the scramble to explore alternatives reminds a little bit of the very early days of social media.  I’m old enough to remember social networking sites like Friendster and Orkut, and there were plenty of others I’ve forgotten who never gained critical mass and flamed out.  I joined Twitter in 2009, and over the past 13 years it has grown to become the social media platform I find the most valuable.  Having heard people mention Mastodon in the past as an open source Twitter alternative (Trump Social even tried to use the codebase without attribution), I created an account—@genxjamerican@mastodon.cloud—to see how Mastodon compared for myself.

I’ve only been on Mastodon a week, but if I were to try and distill my advice of getting started into just a few points they would be:

I don’t recall why I chose mastodon.cloud as the server to sign up with, but creating an account was straightforward enough.  It appears to be one of the largest Mastodon servers, along with mastodon.social, the original one operated by the German non-profit of the same name.  Using the official Mastodon mobile app, or one of the third-party apps makes the process a little slicker.  Stick with one of the largest servers unless you come across a particular server/community that really interests you.

Unfollowing, muting, blocking, and reporting all appear to work similarly to the way they do on Twitter (though I’ve had no need to do any of those things after so short a period of time).

A post (or a reply to a post) in Mastodon is called a toot, and they can be up to 500 characters long.  Sharing the post of someone you follow is called a boost.  You can favourite posts as well, though that only puts the toot in a list of your favourites (instead of sharing that fact with whoever follows you).  You can add content warnings (CWs) to your posts, so someone has to click through to see the content.

Posts can include pictures, but it doesn’t look like you can post videos. I follow @AmiW@mastdon.online and she posts pictures of street art from all over the world.

You can also send direct messages to people–if their accounts allow it.

There does not appear to be any such thing as quote-“tooting”.

For me, spending more time on Mastodon exploring the features and looking for bigger and better guides to and explorations of Mastodon by others.

Martin Fowler is writing a whole series of posts on his exploration of Mastodon that I’ll be following with great interest.