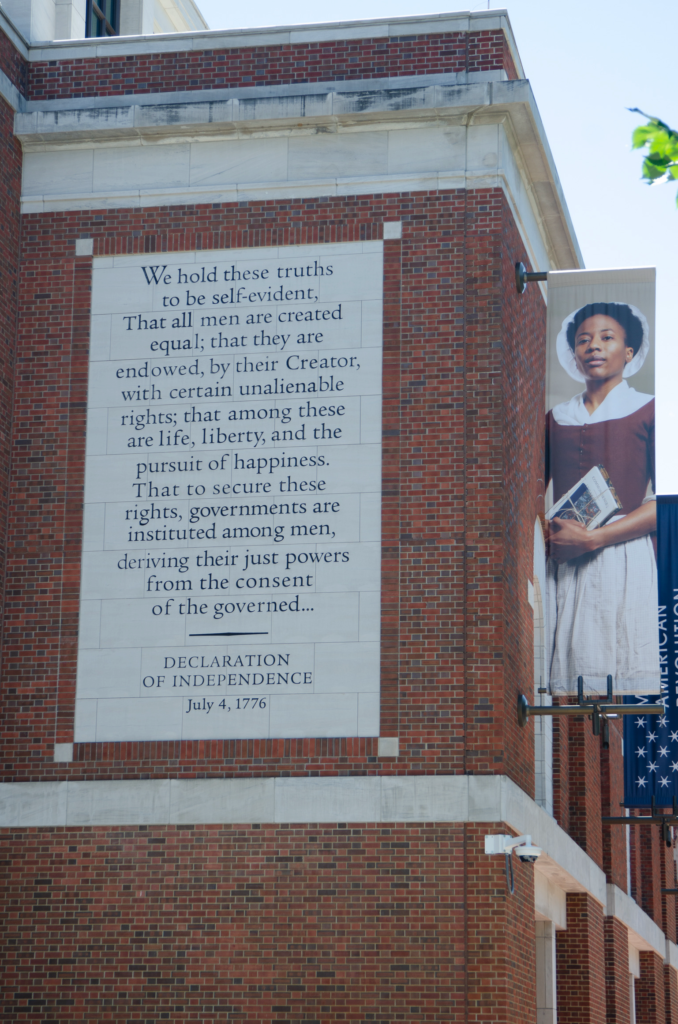 In two days, this country celebrates 246 years since the Declaration of Independence from Great Britain, after a Supreme Court term that has seen the Supreme Court overturn Roe v Wade and Casey v Planned Parenthood, expand qualified immunity for police officers, weaken enforcement of Miranda rights, issue multiple rulings undermining the Establishment Clause of the 1st Amendment to the Constitution, issue multiple rulings undermining tribal sovereignty, and issue a ruling undermining the ability of the Environmental Protection Agency to regulate carbon emissions and fight global warming. The featured image for this post, which I took during a walking tour of Old Philadelphia on June 19th (Juneteenth) after Alito’s draft of the Dobbs decision but before the final issuance on June 24th, is an unfortunately timely encapsulation of the contradiction between America’s founding documents and ideals and the reality of how the failures to live up to them played out in the lives of everyone else. Our guide, a Philadelphia public school history teacher, did not hesitate to point out the contradictions here or at any other point in his tour.

During this time in history, and the period just after from which Alito drew his arbitrary rationale, women in general had few rights the US government was bound to respect and black men and women had none. As has been written far more eloquently by Adam Serwer among others, it seems that the 19th century is the era to which Alito would have us return. Having heard and read the parallels drawn between the Texas Heartbeat Act and fugitive slave laws, I found it very educational to visit the Independence National Historical Park (home of the so-called Liberty Bell) and read exhibits describing the impact of the 1850 Fugitive Slave Act on black people.

Before seeing this exhibit, I wasn’t aware of the Fugitive Slave Act of 1793 which preceded the 1850 law. Fugitive slave laws weren’t just a feature of the 13 colonies prior to independence, the US Constitution itself contains a fugitive slave clause added at the behest of southern politicians. Whether traveling for freedom from enslavement or to a state where abortion remains legal, it is quite disturbing to be able to draw any parallel between a woman’s legal status in 1851 and her status in 2022. It simply should not be the case that my daughter should grow up in a modern democracy with fewer rights than my wife did when it comes to her body. In the wake of the Dobbs decision, nightmarish stories such as this are already coming out:

The very idea of a rape victim being this young is horrific enough. But the state compelling a child to bring another child into the world only compounds the horror–especially if whoever committed this crime was a family member.

Autonomy is one of a number of synonyms for independence. The overturning of the Roe and Casey decisions has certainly taken that autonomy away from women and girls in states with so-called trigger laws. It appears the losses of autonomy won’t stop there however, regardless of the words of Justice Kavanaugh’s cynical concurrence with the Dobbs decision. Beyond the Supreme Court’s decision to undermine tribal sovereignty, a decision so egregious that even Neil Gorsuch dissented from it, the political right in this country intends to ban abortion nationwide if they gain sufficient power. Justice Thomas’ concurrence with the Alito-authored opinion puts the rights granted by decisions like Griswold v Connecticut, Lawrence v Texas, and Obergefell v Hodges (but not Loving v Virginia, despite it having the same rationale) in the crosshairs for repeal.

At the same time the Supreme Court has seen fit to seize autonomy from women and marginalized groups with multiple decisions in the recent term, it has granted increasing autonomy to religious institutions–especially Christian ones–under a questionable interpretation of religious freedom. The court’s ruling in Carson v Makin compels states to fund private religious schools. In Kennedy v Bremerton School District, a ruling which granted a right to Christian prayer led by a state employee, the majority’s stated grounds for doing so were so obviously false that Justice Sotomayor was able to include photographic evidence in her dissent of the coach in question conducting what was clearly not private, individual prayer.

A little over a year ago, the Supreme Court ruled in Fulton v City of Philadelphia that despite being funded by taxpayers and acting as an agent of the government, a Catholic foster agency could use religious grounds to discriminate against LGBTQ couples in adoption. The conservative majority on the Supreme Court also used religious freedom as the rationale to exempt churches from government rules broadly applied to prevent the spread of COVID-19 (despite well-documented evidence that church gatherings both domestically and internationally had proven to be superspreader events in the early days of the pandemic). The unwillingness of some of my fellow believers to be part of slowing and stopping a pandemic that killed 1 million of our fellow Americans and over 6 million worldwide has been a frankly depressing thing to see. Regular church attendance has been part of my life for decades, the point of origin of many of my longest lasting friendships, and where I met my wife. Church had been a regular part of our children’s lives as well until the pandemic hit, and for the better part of two years we’ve forgone in-person church attendance in hopes of helping bring the pandemic to an end. Looking to the interests of others instead of ourselves is just one of many lessons of Philippians 2 that the American church has not done a good job of exemplifying of late.

The willingness of my fellow Christians to abuse the power of the state and the judiciary to impose their particular interpretation of the Bible on those who don’t share that interpretation (or share their faith at all) does not merely bode ill for both the church and the state, but is contrary to the free will we believe God grants to accept or reject salvation. Having seen not just the Supreme Court, but conservative politicians so blithely dismiss the rights of those who do not share their beliefs or worldview, it is not difficult to imagine a future that is as bad as our past when it comes to religious pluralism. My own home state of Maryland, originally intended as a refuge for Catholics (though few actual Catholics were part of its founding), ultimately brought up the rear in this respect for the entire country at the time.

The Declaration of Independence may be 246 years old soon, but true democracy in this country is much younger. The response of this country to both 9/11 and 1/6 demonstrate that the experiment is far more fragile than many Americans realized. We are in grave danger of becoming far more a cautionary tale than an example to be emulated.